SPOILER: I'm conscious this post may cause people to tell me I'm wrong. I'm OK with that. Please comment from your perspective, and your expertise. 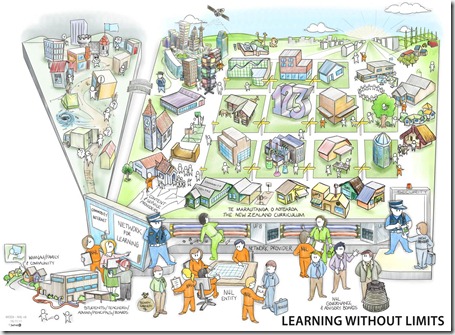 In that horrible way of education, the soon to be inaugurated Network for Learning, is known by the shorthand: N4L.

Because, you know, it's for the kids. Or possibly, it'd get sued by the National Football League for using the obvious acronym.

The Board has been announced by the Minister today. A new Crown entity will be formed, with an ongoing relationship with the Minister of Education. The Board members are:

The fact that it's made up of CIOs, CFOs, former CEOs, one lawyer and a single representative of the education sector is a little worrying if I'm honest. The experience of these individuals comes mainly from running business such as Microsoft, NZ Post, Airways NZ, a private venture equity group, several ISPs. The exception being Linda Tame.

Rick Shera I have met and his work with Netsafe is excellent. He has prepared several resources to assist schools with their thinking after the S92 legislation. He's a Kiwifoo graduate, and he's on Twitter.

To be fair to the other members, I'll be keen to hear their perspectives and attitudes to the purpose of the N4L.And I appreciate their expertise will be useful in the running of an entity such as this.

But I can't help feeling nervous. I'm not sure if I'm more nervous about the lack of education expertise on the Board, or the fact that this crown entity will be working with the Ministry of Education for the education expertise. Possibly that's too harsh.

I'm most nervous because of the last line of the press release.

“With a board and chief executive in place we will be even closer to delivering an online network for schools that will enable improved access to education resources for learners and help lift student achievement.’’
It's pablum and just PR pablum at that - but still. Stop setting expectations and imagined outcomes in place, merely for the sake of being seen to be doing it for, you know, the kids. Especially before the process even begins.

This is a board to manage the expenditure of $400 million taxpayer dollars. It's responsible for overseeing the planning, the design, the procurement, the build and the implementation of a massive amount of hardware, software and services that we'll come to know as the Network for Learning.

Whether or not that oversight of said network makes any jot of difference to student achievement is not up to this Board. It's up to the education sector, who at this time - still have to opt in to using the Network for Learning. Considering the amount of money that's been earmarked for this project, I find it hard to believe that the MoE or Treasury will be tolerating those schools that don't actively 'opt in'. $400million of taxpayer funding lends itself to a fair bit of expectation around opting in and usage.

This is an education sector who is still largely in the dark about the implications and possibilities of the N4L. A google search for "network for learning" brings up very little. There are a few statements of fact here and here, along with this rather dead end, which loops to a the previous "statement of fact".

The official TKI site which lists the Network for Learning RFP has a broken link. (umm...)  The FAQ for the RFP is here and actual RFP docs are provided here. The Ministry is running seminars around the country in the upcoming months to cover a range of issues around UFB, N4L and a host of other technical topics.

Away from official channels there is this post by Hazel Owen, from Jan 2012, which includes this line, (and the image at the top of this post):

The Network will be the channel for education content and service delivery and this will have major implications for the way the Ministry and other agencies deliver content and services to schools.
Articles in the Education Gazette and Education Aotearoa are also useful. The latter article is most telling, as it examines one of the implications behind the N4L.
National Standards and the Network for Learning

Former Education Minister Anne Tolley said last year that the Network for Learning is for schools to connect, collaborate and share resources and best practice.

National’s education policy mentions the network in the context of strengthening accountability and performance measurement. Among other things, National wants to “measure the value a school is adding to a students’ education” and “shift the resourcing model, so it incentivises performance”.

It says it will use the network “to support collection and dissemination of data and knowledge”. Does this mean gathering and reporting on National Standards and other school and system-level measures?

The minister’s words and the party’s policy stand in tension. The government is saying education is a collaborative exercise while ushering in a competitive environment. Collaboration may well be the loser.
There will be many winners on this Network for Learning rollout.

Whether or not those winners are the schools, educators and students, and in what ways will they be changing as a result of the design, procurement and implementation of the N4L is still open for debate.

In my role as IT/e-learning lead teacher I get lots of
In New Zealand education policy, the failure of Talent2 and the Ministry
Or Dell. Or Yahoo. Or Facebook. Or Google. I wrote most of
Last week I was invited to present to the Ministerial Cross Sector